The Keweenaw National Historical Park celebrates the history and the stories of the copper mining industry on the Keweenaw Peninsula through the preservation of almost two dozen heritage sites and museums. The copper industry almost single-handedly populated this area of Michigan and dominated life here from the middle of the 19th century. This becomes important when you think that this little area made all the rapid advances in electricity, phone connectivity, automobile manufacturing, and refrigeration possible. Increasing demand for copper in the 1840s initially brought developers to the area based on reports of surface deposits, but the discovery of the high yield Calumet Conglomerate Lode followed by the Pewabic Lode retained them. Spurred by the need for telephone cables and transformers in the next few decades, huge mines were constructed that extracted over eleven billion tons of exceptionally pure copper from the peninsula and produced over 95% of all copper in the world by the late 19th century.

I had first become aware of the presence of copper on the peninsula and the island of Isle Royale not too long ago when I learned that pieces had been traded as far as northern Florida and Louisiana via the extensive trade networks created by the Cahokians. But I was unaware of the massive mining efforts or more interesting, their implications to the history of our country and life in general as we know it. We began our exploration at the Coppertown Mining Museum in Calumet which helped rectify many of the gaps in my knowledge with regards to the role of copper in industrialization before we moved past the general exhibits to the focus of the museum – the massive Calumet & Hecla (C&H) Mining Company which dominated the copper industry.

C&H produced more than half the copper extracted from the peninsula, building multiple shafts and smelters. They not only controlled a majority of the supply but also the towns adjacent to their operation sites, the largest of which – Calumet – grew to over forty thousand inhabitants by 1910 as the company actively recruited and imported workers from approximately thirty different countries including England, Finland, Poland, and Ireland. Calumet and other company towns were managed entirely by C&H, which provided excellent living conditions and related benefits for its workers such subsidized housing serviced by water, sewer, electricity, and phone lines; free hospitals; public schools; libraries containing materials in the dozens of languages spoken by its workers; a matching contribution health insurance fund; and more. But working for C&H was not rosy. In addition to the difficulty and danger of the work, miners were paid approximately one third less than competing companies in exchange for these benefits and were under de facto control of the company which consistently used intimidation, coercion, eviction, and mass firings to prevent unionization and other activities deemed to negatively impact profitability. In addition, even the seemingly paternalistic benefits offered to workers served as methods to control and manage the workforce: for example, by using education to train boys to be future miners (through coursework in mechanical drawing and construction) and girls to be housewives (notably through a mandatory 120 lessons in cooking).

Many workers accepted this bargain however, trading lower wages and control for the idea (perhaps not the reality) of security and an easier way of life for themselves and their families. That is, until 1913 when the company, faced with the rising expense of operating deeper mine shafts and the reduced quality of the copper at depths, introduced the one-man drill which eliminated the jobs of thousands and introducing unsafe working conditions by forcing having men work in isolation, far from help should an accident occur. Coordinated by national unions wishing to represent the workers, the miners striked, blockading mines and engaging in violent retaliation for unfair prosecution, bullying, and physical attacks. Striking continued for nine months, ultimately causing C&H and other companies to accede to many of the miners’ demands, but not before many lives were lost and thousands of families driven into poverty. The most notable tragedy however was the Italian Hall Disaster that occurred on Christmas Eve of 1913 when an unknown person yelled, “Fire!” inside the building where a Christmas Party was occuring in support of the striking workers. Seventy-three people died – most of them children – in the rush of the the thousands of people attempting to escape through the single exit. 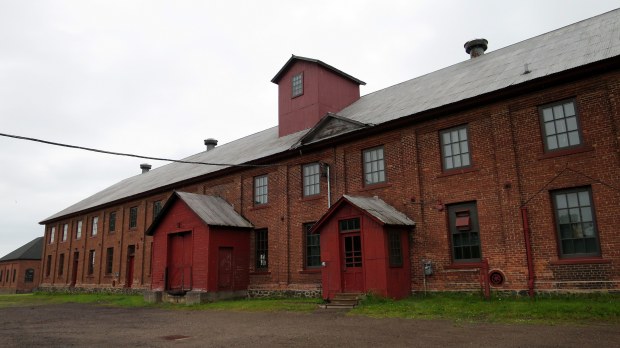 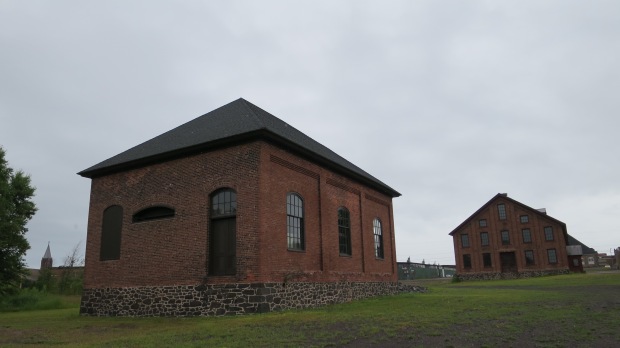 After spending a couple days on the peninsula we began traveling again, but not before stopping at the Quincy Mine Hoist for a mine tour. The Quincy Mining Company operated multiple shafts from 1846 through 1945, most notably the Number Two which at the time it ceased production in 1945 was the world’s deepest mine at 9,260 feet. This nearly two mile long shaft containing 92 distinct levels necessitated a unique hoist to transport men and materials down the 55 degree grade, and in 1918 the company commissioned the world’s largest steam driven mine hoist, housed in a massive structure designed in the Georgian architectural style complete with brick veneer and Italian tiles covering the interior walls. The hoist, contracted from Norberg Manufacturing Company, measures 60 feet by 54 feet, and has a 250-ton drum that can accomodate over two and half miles of cable capable of raising rock and lowering workers at a rate of 36 miles per hour. It is seriously huge. Lowered by crane and assembled inside the building, the drum weighs over 880 tons, sits on top of the largest concrete foundation ever poured, and is housed inside a hoist house nearly 5 stories high. The structure is undoubtedly the highlight of the surface tour.

At the conclusion of the tour of the hoist house we boarded the narrow gauge cog railway and descended the steep hill to the mine opening at ground level. Because of the slope of the hillside, we entered the mine at the seventh level, traveling almost half a mile through tunnels that had been created in the 1860s. These tunnels still contain original tracks for hauling out rock and now also include displays of the different types of drills in use over time. I’ve been in a fair number of caves before, but this trip underground was considerably wetter since all 85 levels of the mine below the seventh refilled with water after the mine was abandoned. The dampness made the mine feel even colder than it actually was and made it difficult to stop thinking about what an absolutely horrible place this would have been to spend 12 hours a day in – nevermind the back-breaking, life-endangering work. And at the deeper levels miners were confronted with temperatures above 90 degrees and steamy, impossibly humid conditions. After the underground tour concluded we were returned above ground and left to visit the remaining structures on the property including the 1882 Hoist House, which had the original skips – the carts that were lowered into the mine – still on the tracks.

Models of the original structures on the property, Quincy Mine Hoist, Hancock, Michigan

Depth gauge that controlled the ascent and descent of the skip, Quincy Mine Hoist, Hancock, Michigan

View of the town of Houghton from narrow gauge cog tram, Quincy Mine Hoist, Hancock, Michigan

One of the original shafts from mid-19th century above that was accessed via ladder, Quincy Mine Hoist, Hancock, Michigan 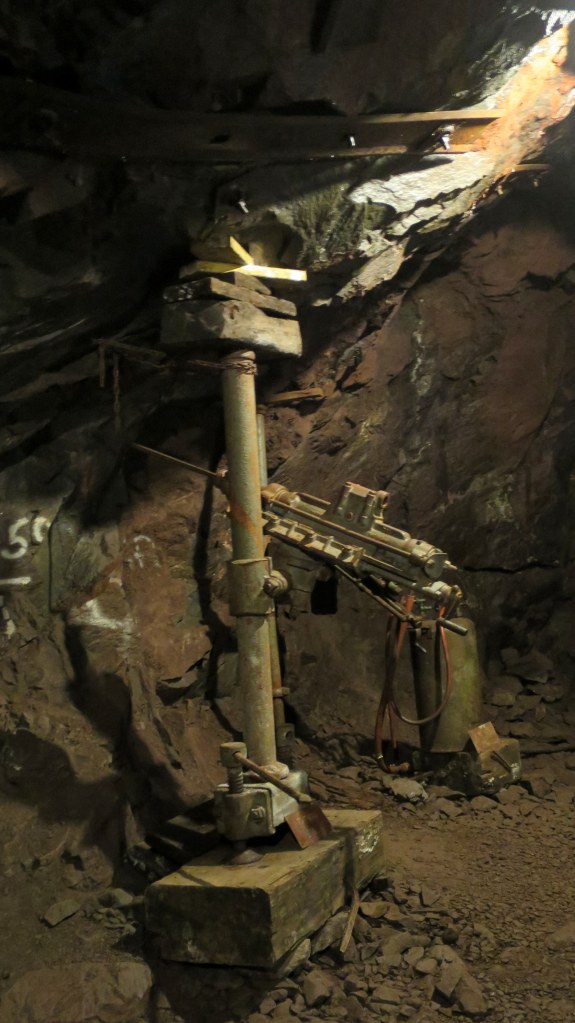 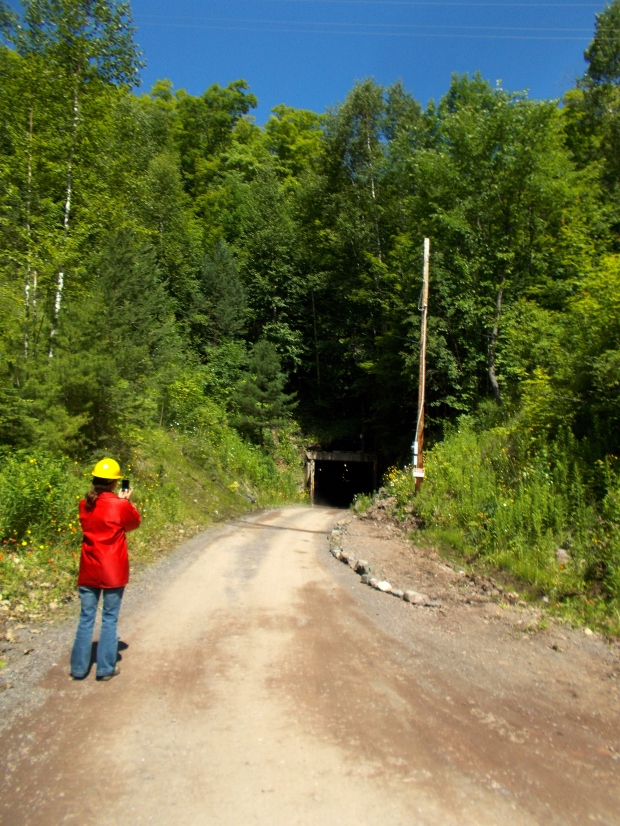 Me photographing the mine entrance, Quincy Mine Hoist, Hancock, Michigan

Interior of 1882 Hoist House with miner transport skip on right and water scoop on left, Quincy Mine Hoist, Hancock, Michigan