While we were in Las Cruces building with Habitat for Humanity we had some pretty great weekend adventures, but we had some pretty great everyday adventures too in the forms of dog walking, brewery visits, and local explorations. Walking with Abby always bookended our work days – a little over an hour in the morning and as long as the three of us agreed upon in the afternoon – and while we most often walked in the flat, mostly-featureless desert near where the job site was located, we were always within view of a couple of pretty mountains ranges. The Organ Mountains in particular, a series of needle-like igneous spires rising to the east of the city, provided a spectacular foreground to the sunrise every morning. We would often countdown until the sun popped over the peaks, watching the light move across the valley, and waiting impatiently for the sun to warm the freezing morning air. As bland as the desert terrain through which we were walked was, you couldn’t really beat the intensifying colors reflecting off the mountains to the west either. Starting in late February the coyotes began making frequent appearances on our walks and we had to start keeping an eye on Abby, but other than that the most interesting event was the afternoon I bent down to give Abbs water and got cactus stuck in my butt. Thankfully Tom was there to witness this event and take a photo before helping me (because you can’t really pull these kind out by yourself). We all had a good laugh about this incident, but I did have a cactus needle that I was unable to dislodge for 6 days. 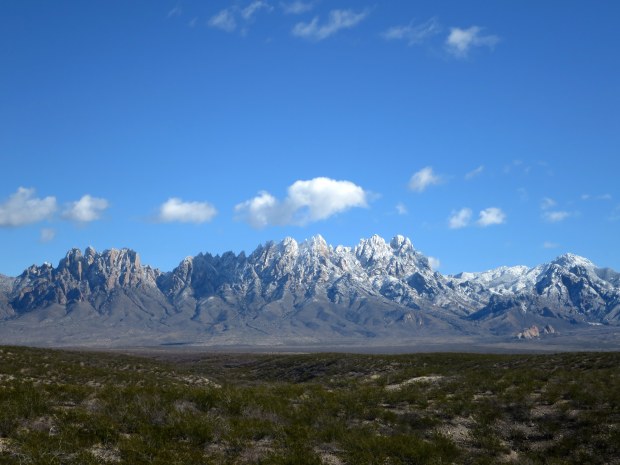 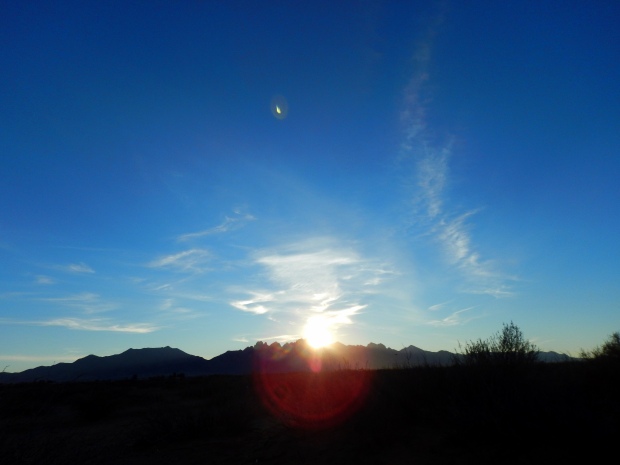 The sun finally pops over the Organ Mountains on the morning dogwalk, Las Cruces, New Mexico 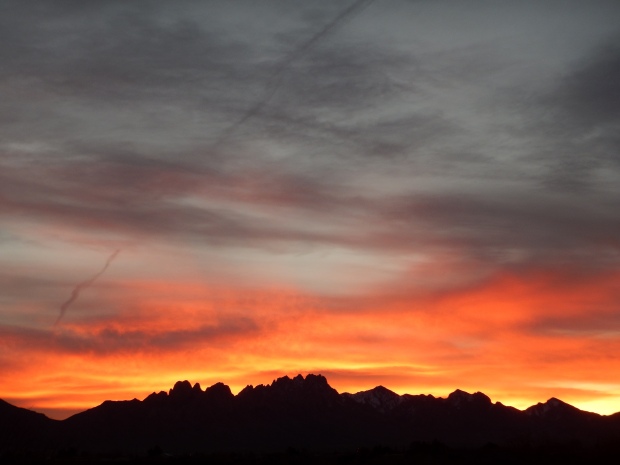 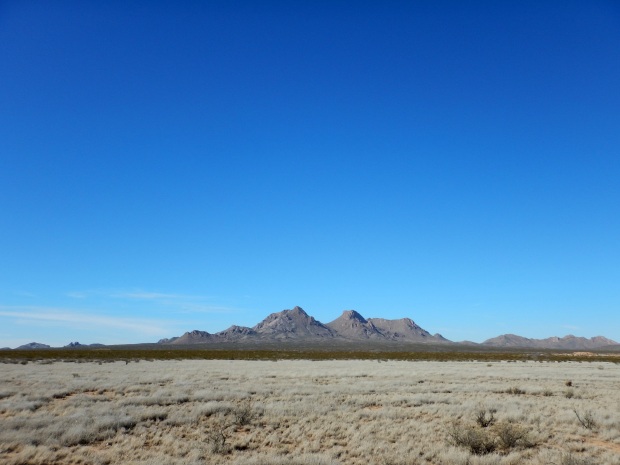 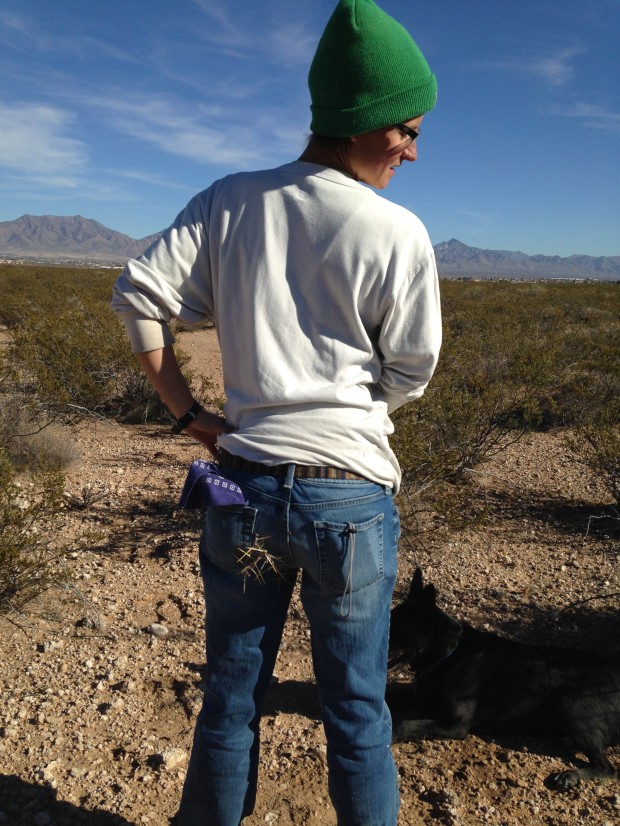 Perils of desert dogwalking. Or, I sat on a cactus, Las Cruces, New Mexico 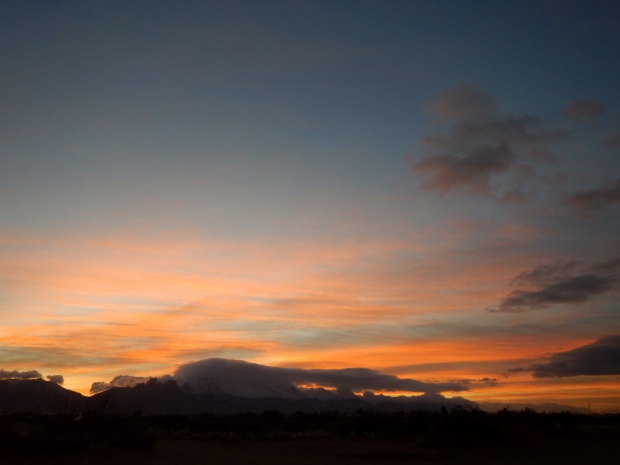 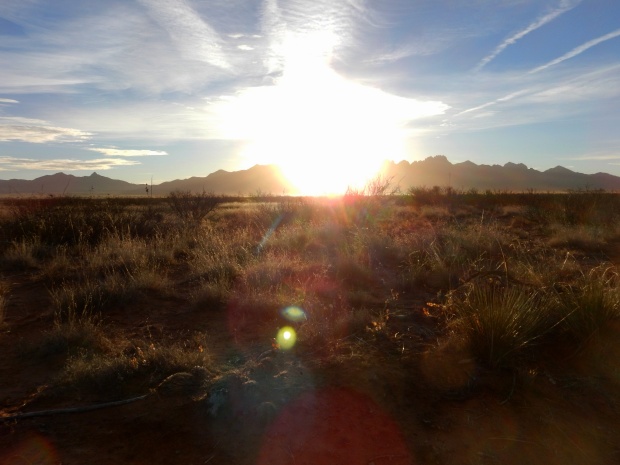 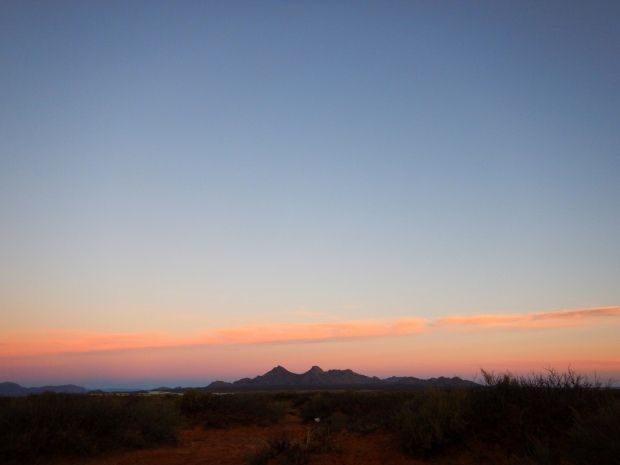 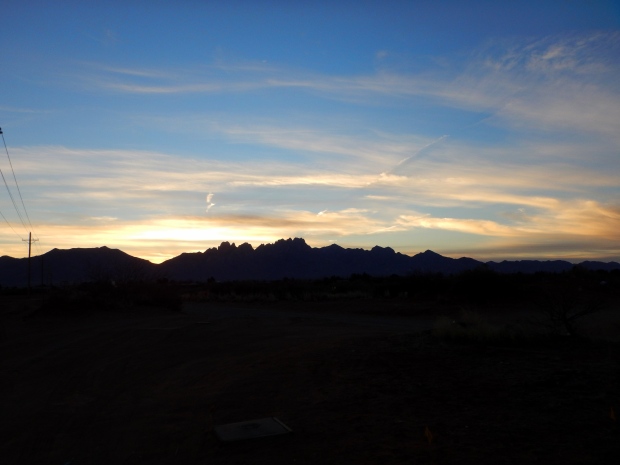 We had a few other small weekday adventures, most notably the stop to see the historical plaza in Old Mesilla which contains a slew of tourist shops, but also some interesting historical buildings, including the oldest brick building in New Mexico. Our favorite outings however were our visits to one of the local breweries, which we would stop at one or two days a week after work. Of the four places brewing in Las Cruces, our favorite was undeniably the laid back High Desert Brewing Company. Pints were $3 and they always had at least a dozen beers of tap, cycling through the 30 or so styles they brewed. They had a solid IPA which was my go-to for a few weeks but other standouts included an excellent, flavorful amber ale that sadly went off rotation the week after we arrived, a well-balanced porter that was delightfully light in body, and an above-average, malty black IPA. But we really just liked it because it was a normal place, albeit a normal place with a comfortable patio that allowed us to bring Abby. Any place where we can drink beer with our dog gets extra bonus points. Tom thought their food was decent too and I certainly enjoyed a few baskets of chips and homemade salsa. It should be noted that some of their beer was not enjoyable but there were always a couple on tap that we liked so it wasn’t an issue for us.

The best beer in Las Cruces was to be found at Bosque Brewing Company. We only went their once however because the taproom was small, starkly modern in design (read: not very comfortable), and full of university students from across the street. Seriously, I was the second oldest person there. So while it just wasn’t a comfortable place to kick back after a day of sheetrocking, they undeniably had excellent beer. I didn’t look into it but I’d be willing to bet they used citra hops or something similar in a lot of their brews because they were almost uniformly crisp: exceptionally light, flavorful, and deliciously thirst-quenching. After sampling a flight I went with their “Just For Fun” Imperial IPA that was out-of-this-world good and extremely well-nuanced despite it being I think 9% ABV. Running a close second for the title of best brews were some of the offerings at Pecan Grill and Brewery, notably the exceptional pale ale (why don’t they bottle this?!?) and the understated, flavorful hefewizen which were our two favorites. Though the beer was great here, it was a pretty fancy place for ‘lil ‘ol me and definitely not somewhere I’d go too often if I lived nearby. I mean, I had to change out of my paint-covered clothes just to drink beer here. The final brewery – Spotted Dog in Mesilla – was one we wanted to love, particularly because they had an Abby-friendly patio, but many of their beers kind of fell short. They weren’t bad, but I just didn’t enjoy drinking them. Tom was also not enthused with any of their offerings on either of our two visits. The two best beers I tried ended up being their amber (which was sad in comparison to the flavor of High Desert’s) and their brown ale, neither of which are styles I regularly enjoy. But the people were really nice (shout out to Tabitha, our awesome server) so I’d definitely give them another chance on a return trip to southern New Mexico. 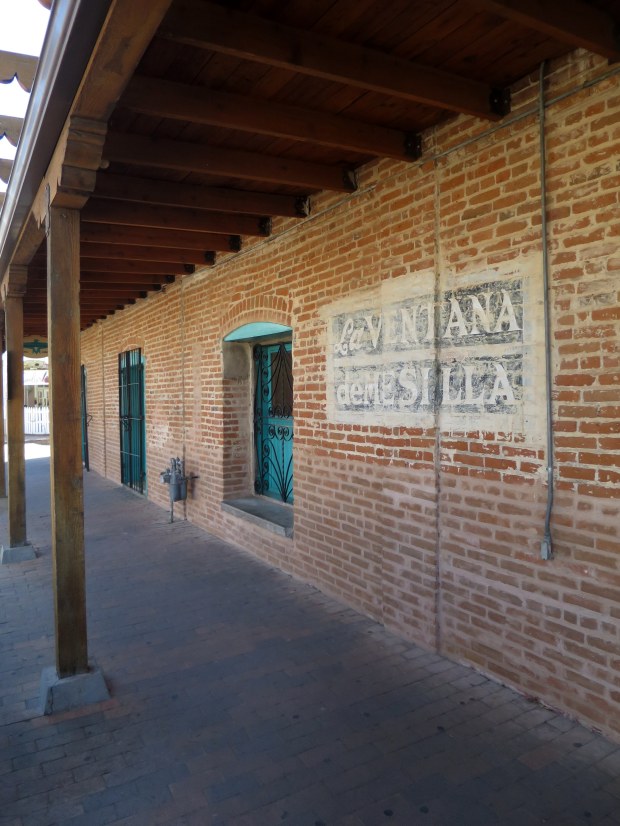 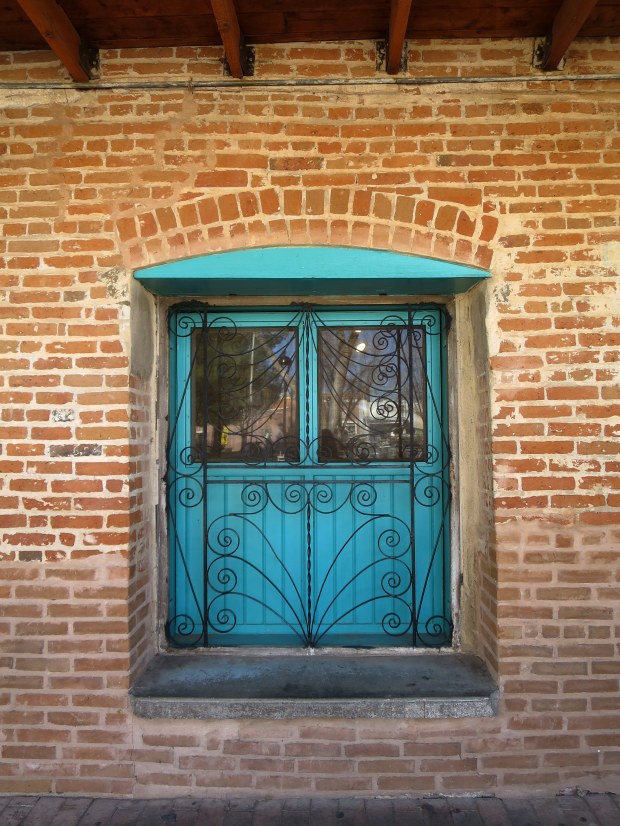 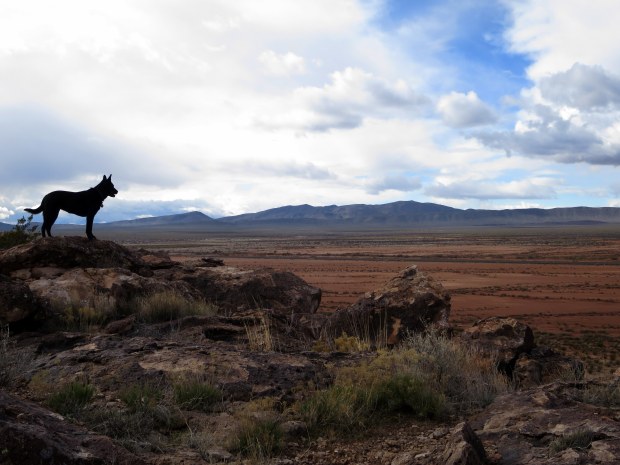 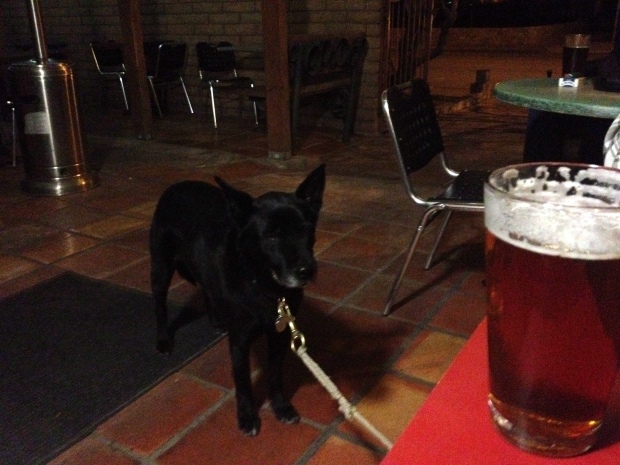 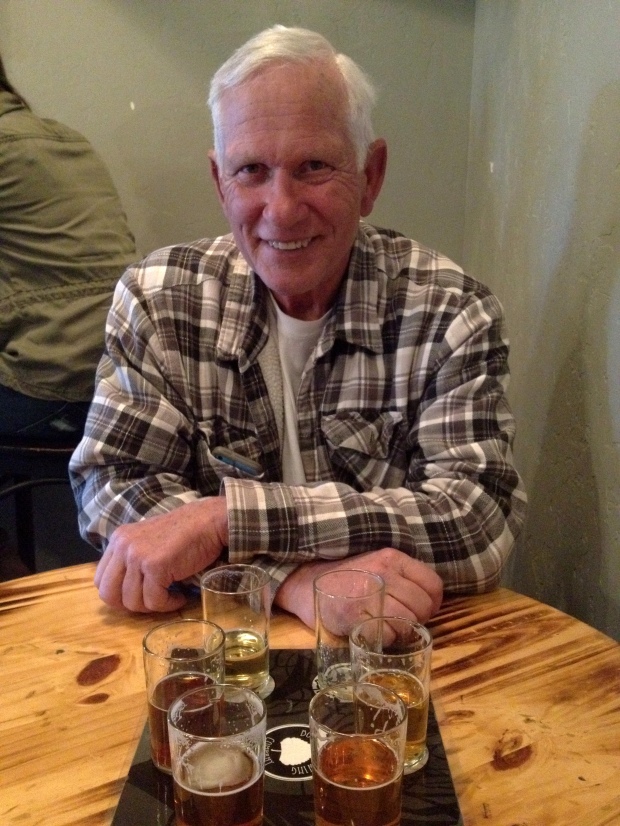 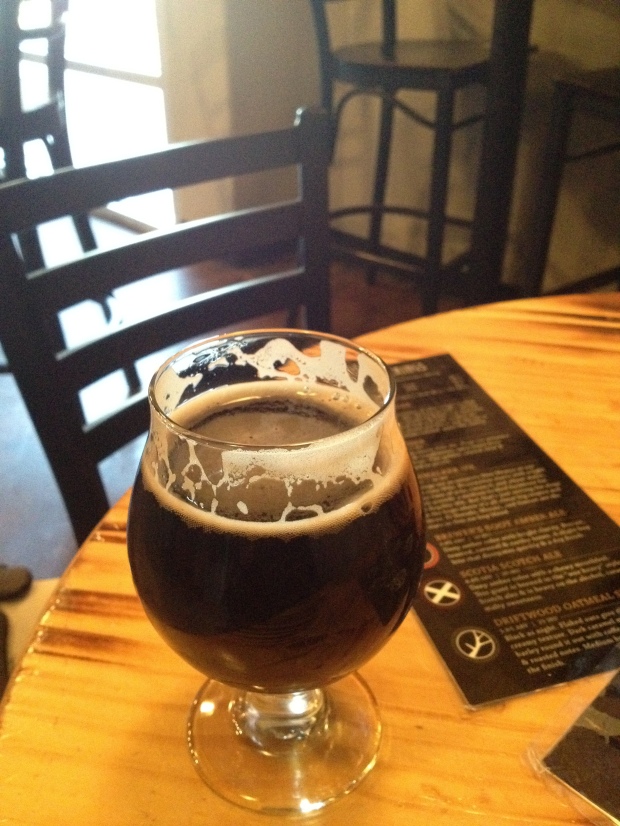 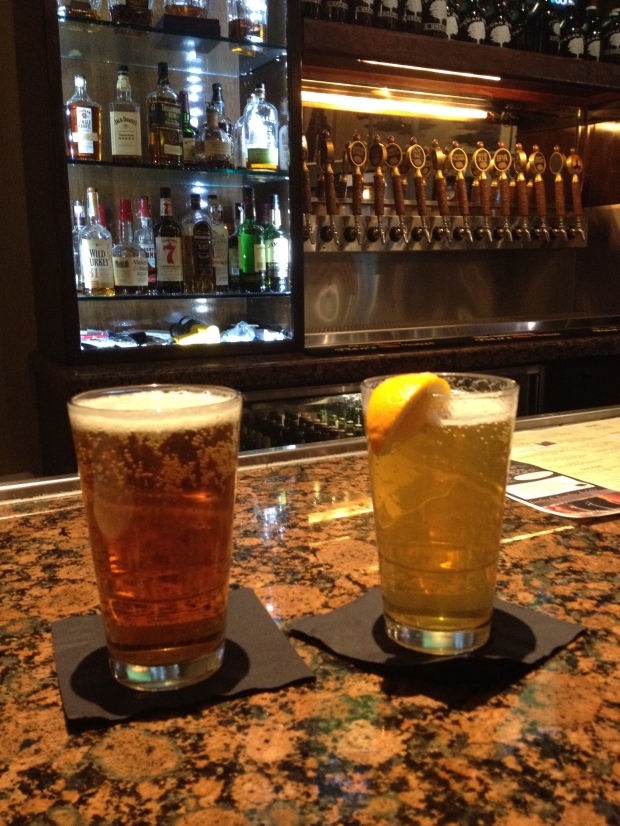 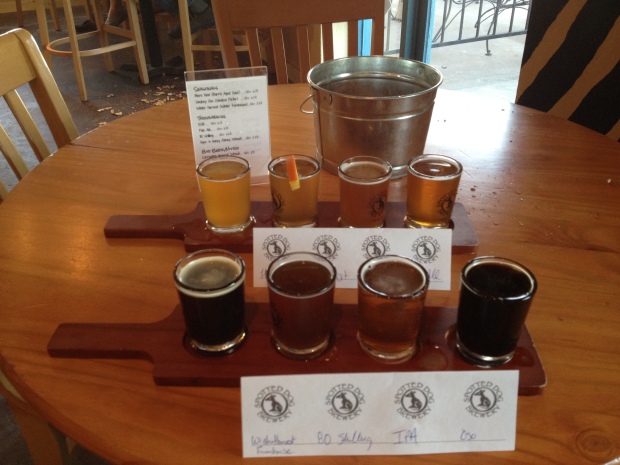 2 thoughts on “Dogwalks, Breweries, and Other Las Cruces Explorations”