Building with Idaho Falls Area Habitat for Humanity in Rexburg

Immediately after finishing our build session in Libby we headed 500 miles south to Rexburg, Idaho to begin our 2 weeks there. Located 30 miles north of Idaho Falls in the Upper Snake Valley, Rexburg is a medium-sized town in which the affiliate had just begun construction of a duplex. When we arrived the foundation had been poured and the pressure treated sill plates anchored to the concrete – and that’s it.

The site on our first morning

Our first morning Construction Supervisor Steve pulled out the plans in order to orient us with the site and the tasks that lay ahead of us. Then the flurry of activity began: Lumber, saws, nail guns, and more were handed down into the 4 foot high crawl space, and the building commenced. Originally there were 6 couples on our care-a-vanner build so it was a bit difficult for Steve to “stay ahead or us” so to speak and keep everything moving while he checked to make sure our subfloor components remained square and flush. By the afternoon the two pony walls (which help bear the load of the floor in combination with the concrete foundation) had been erected and it was time to measure and cut the I-beams that served as floor joists. After installing the joists we procedded to add 12-inch high boards around the joists, called rim board or rim joists, to complete the square frame on which the floor would be laid.

Construction Supervisor Steve reviewing the plans on our first morning 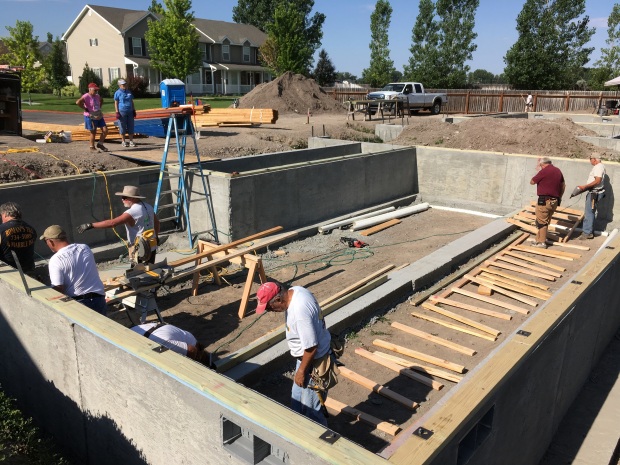 The next morning we split up with some care-a-vanners duplicating the process on the second side of the duplex while a few of us began working with Steve on the first side to position and nail down the OSB sheets that became the subfloor. As a local group from Wells Fargo arrived however we on the subfloor crew shifted to side 2 and helped get the joists and rim board in. By the third day we care-a-vanners, sans Steve, began installing the subfloor on the second house and I learned exactly how much glue, applied with long extension-like caulk guns to each joist, was used to help prevent floor squeaks (it’s a LOT). Thousands of nails are used as well, also in the name of reducing squeaks – as well as securing the floor, of course. Nailing off the subfloor and positioning the sheets of OSB while maintaining proper spacing and keeping the floor square to our box (and the first sill plates laid on the concrete foundation) made the decking a nearly all-day affair for us as we attempted to be as careful as possible. I have learned that any mistakes or imprecise measurements made at this stage will cause a compounding effect that will result in a lot of problems further along in the construction process.

Repeat of pony wall construction for side 2 of the duplex 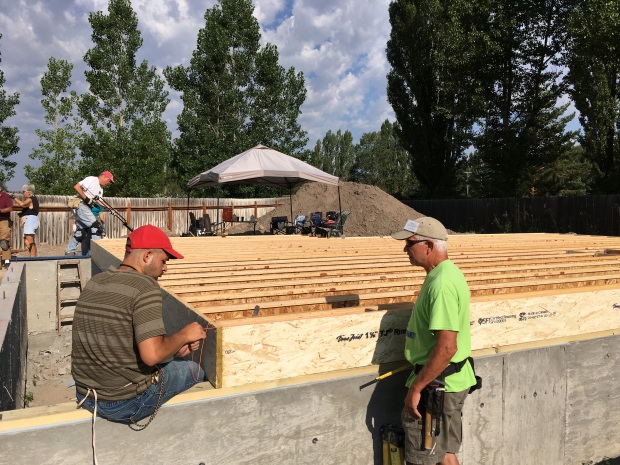 Putting a string line to check the rim joists for bowing 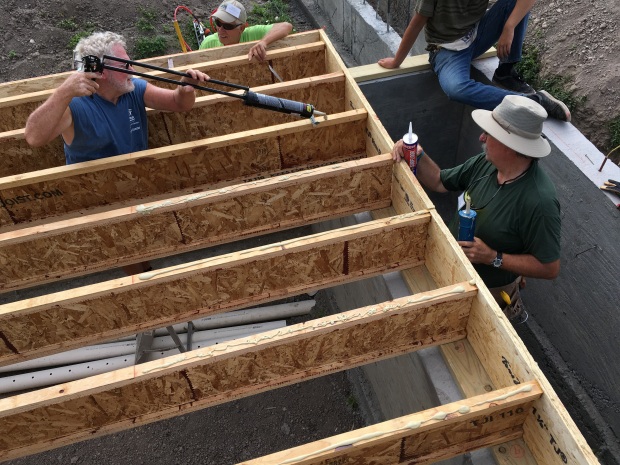 Joe sledging in the tongue and groove subfloor

By our fourth day the floor systems on both houses had been completed and the exterior wall building began. In previous houses I’ve worked on the walls are framed, with vertical studs running between the top and bottom plates. and then raised and secured to the floor or slab. Steve however introduced (some of) us to his method which involved nailing the OSB sheathing onto the exterior of the walls prior to raising them. This actually saves quite a bit of time since you can nail the sheathing down while kneeling or crouching as opposed to nailing up standing on ladders once the walls are standing. It does make the wall units heavier to raise but since we had a dozen people on site it was no problem to gather the necessary muscle whenever a wall was ready to go up.

Before we moved over to the second side of the duplex to build exterior walls there were a few additional tasks, notably checking that the nails hadn’t missed the studs; when they had we pounded them out from the inside and replaced them. We also had to sheathe the rim joists which as I explained above, formed our box on which the subfloor rested (and was thus below the walls). Adding this piece of OSB also served as a gusset of sorts, tying the joists to the sill plates below them that rest on the concrete as well as the bottom plate of the walls above. This strengthens the house. The addition of this sheathing layer here also provides a flush surface for the eventual installation of siding, which will extend below the level of the floor.

All hands on for wall-building on side 1

Wall-building, ramp construction, and shiner removal (nails poking through the OSB sheathing that missed a stud)

Me nailing over the rim joist and bottom plate

With only a few days left we started the constructing the second floor on the second side of the duplex. This house was going to a family with 5 children and thus required additional bedrooms over the garage (which had yet to be constructed at this point), As such, the second floor would be almost double the size of the other house. Similarly to how we’d constructed the subfloors, we spaced the I-beams on top of the plates – though this time we were securing them to the top plates of the walls rather than the sill plates on the foundation. I guess Steve liked my ladder work because the next day, after the garage walls had been framed and erected I got sent up on the ladder again to nail on the end of the 33 foot joists that spanned the garage space. This was notable because I learned how to carry an end of a 33 foot joist up an extension ladder and hoist it onto the top of the garage walls once I got up to that level. I definitely appreciated Steve’s tips on how to maneuver this kind of load and I’d be happy to do it again but I’m not going to lie – it was difficult for me.

Me waiting while putting up second floor joists

I do have to back up a little big however and mention a few things about the garage. First of all, it is atypical that Habitat builds garages. The semi-offical and oft-repeated Habitat saying goes, “We build houses for people, not for cars.” However, due to land availability, price, and local codes, affiliates occasionally have to construct them. And in the case of these houses, the HOA mandated a 2 car garage for each duplex. The second thing about these garages was that because they are for 2 cars there is a very large span (opening) that, in the case of the second side, would need to carry the load of the second floor rooms built above it. The combination of large span and the load requirement thus necessitated an approximately 24 foot, 700 pound glulam beam to be placed over the garage door. Luckily for us there was a contractor on site with some heavy equipment that helped us out with putting that beam up to feet in the air. It was from this beam that the other end of all the floor joists over the garage were hung using some heavy-duty joist hangers.

On our last day I was back laying down subfloor, nailing sheets of OSB to the second story floor joists just as we had for I-beams that spanned the crawlspaces. Other than being mindful of the fact that we were now 9 feet above the ground, this subfloor wasn’t too different than the previous 2 and Joe, Pam, Tom, and I were able to finish it pretty quick, just in time for normal cleanup time.

Laying down the floor

Me nailing off the last of the second level subfloor 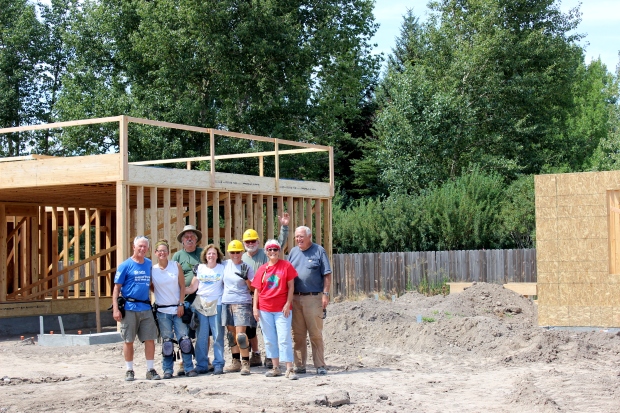 The (remainder of our) crew on the last day. 2 of the 6 couples had to drop out due to emergencies.

This has already turned into a long post because I’ve explained flooring systems – which I haven’t been involved in building before – but I can’t end it without mentioning the 2 incredible partner families who will be moving into these houses in a couple months. The first family includes a disabled veteran Shelby who is raising one of his grandchildren; he was unable to work on site but I met him briefly on two occasions when he visited to bring us doughnuts. The second family consisted of a most remarkable woman named Prudence and her 5 children. I worked alongside Prudence on multiple days. Her story is not mine to tell but I have never met such a joyful, resilient person in my life who, despite a mountain of challenges that would paralyze the average person, not only maintains an unfaltering positive outlook but lifts up others around her. She is a human being I will never, ever forget. It was a privilege to help build a home for her family.