The Schoodic Peninsula and an Encore at McClellan Park

Our day on the Schoodic Peninsula in Acadia National Park was a mistake. When I’d visited Maine 4 years ago I happened upon an awesome hike in the Great Wass Island Preserve that I was eager to show Tom and so I’d planned a day for us there. But I’d forgotten that the reserve isn’t a part of the network of the Maine Coast Heritage Trust (MCHT) Lands and is instead owned by the Nature Conservancy. Which means no dogs allowed. I considered doing another MCHT hike but many of the Heritage Trust coastal trails in Downeast Maine look very similar and so I started hunting for something that would give Tom a little variety from what he’d seen already, – and what else I had planned for us the following day. At some point in my Googling I came across pictures of the Schoodic Peninsula, a section of Acadia National Park separate from the highly-popular Mount Desert Island. I then discovered that Acadia, unlike most national parks, is dog-friendly. Thus a plan was born.

We were camped an hour north of the peninsula so we made an early start to the day to give us plenty to time to explore. Starting at the visitor’s center, we began the Loop Drive with a loose itinerary of walking around at Schoodic Point (the tip of the peninsula which I’d seen pictures of and was enthusiastic about) and doing a hike, possibly to Schoodic Head, the highest point in the area. Like most scenic drives there were plenty of pullouts with opportunities to walk around a bit; we of course took full advantage of these, delighting in the soft pink coloring of the Schoodic granite being battered by the deep blue Atlantic waves. 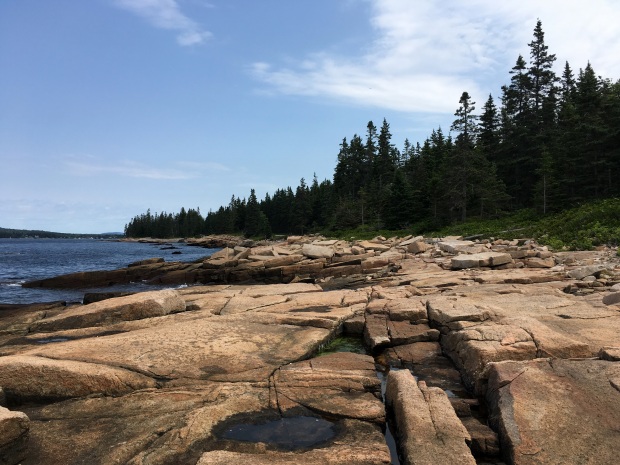 Even though we took our time admiring the sights we still reached the tip of the peninsula at Schoodic Point, which is roughly halfway on the drive, well before 10am. This made us feel comfortable in walking quite a bit in this area, admiring the gray diabase intrusions into the beautiful, finely-grained granite and the stately conifers ringing the pink rock. 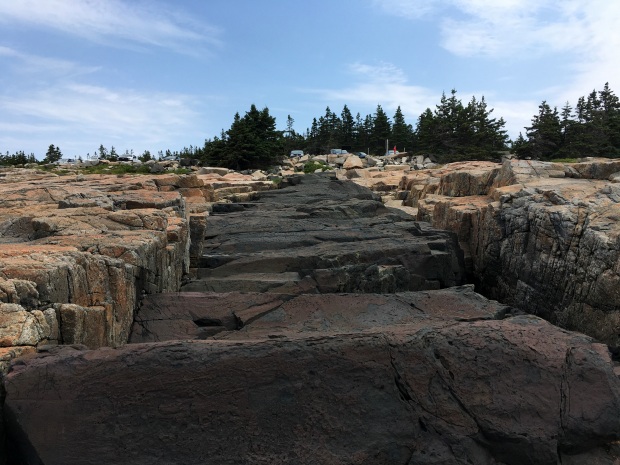 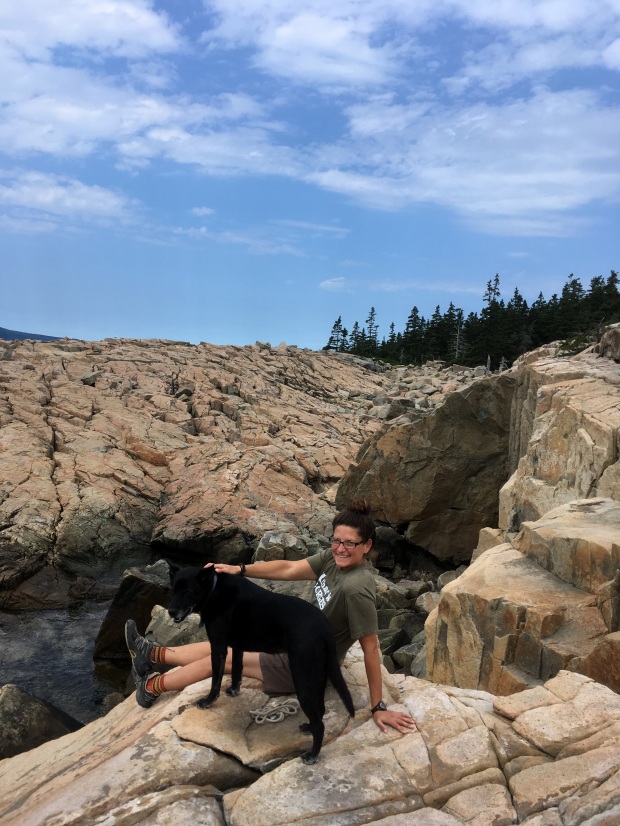 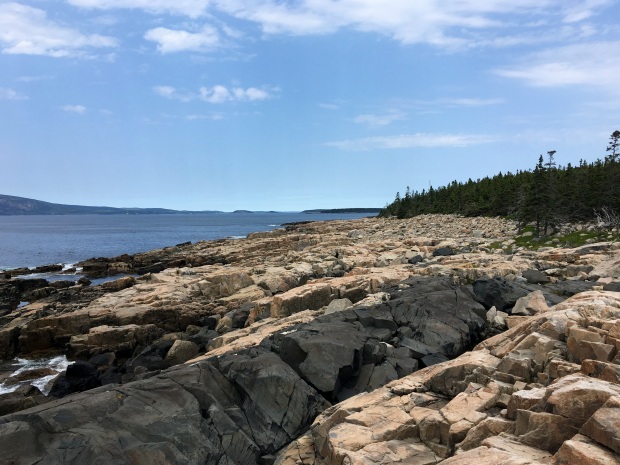 After we felt we’d thoroughly explored the formations and the tide pools we drove to the trailhead for the Anvil Trail, from which we began our ascent of Schoodic Head. The trail was lovely – lush but not overgrown, varied in terrain, with occasions for scrambling up and around rocky outcroppings. Mercifully it was was neither too hot nor too buggy. We broke out of the forest onto an overlook midway through the walk up, but mostly stayed under the tree cover until we reached the gently rounded top of the peninsula whereupon we crossed bare slabs punctuated by spruce trees as we approached the high point – at a whopping 440 feet. From here we had views across to Mount Desert Island (the main section of Acadia) as well as the other islands surrounding the peninsula. 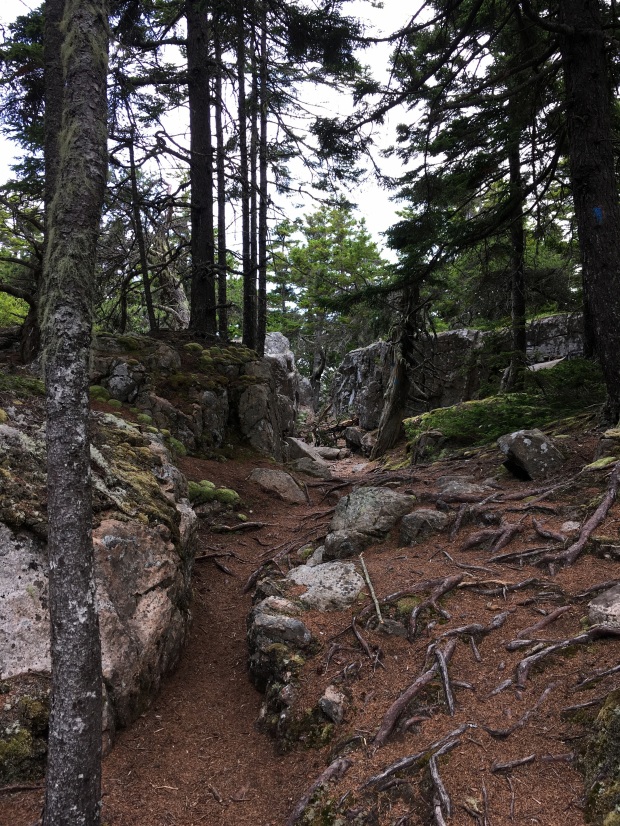 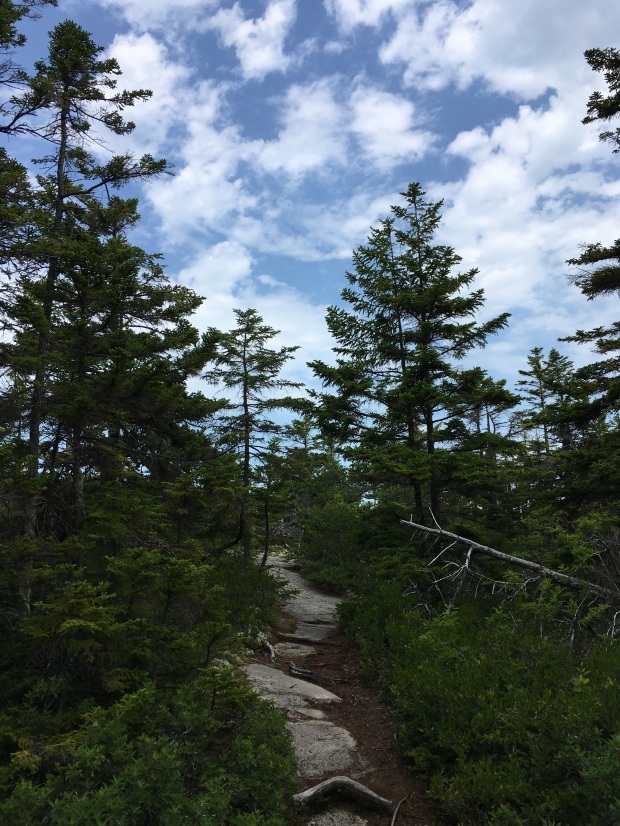 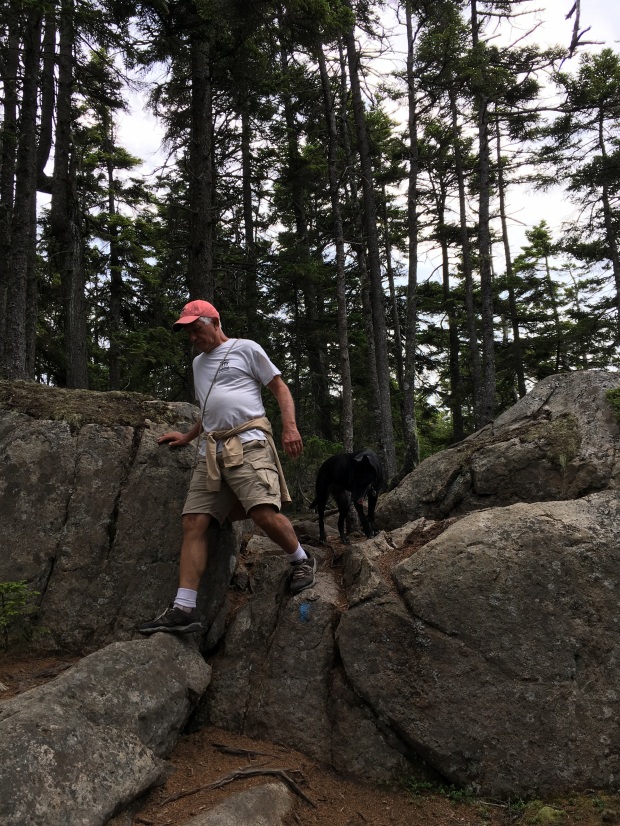 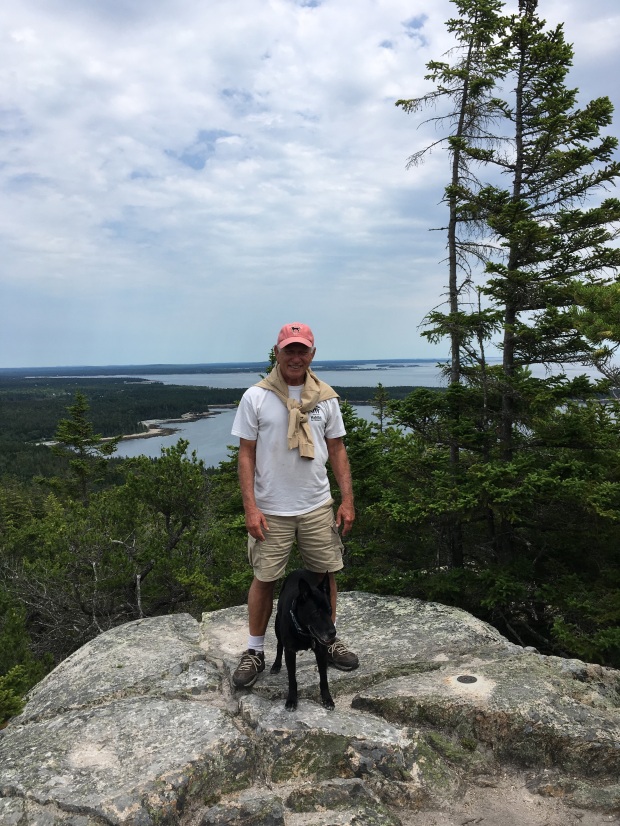 We descended via the Alder Trail, which was similar in character to the Anvil Trail at first, but leveled out towards the end, crossing a more exposed area. From there we continued the Loop Drive along the north side of the peninsula, stopping at more pullouts and exploring a couple bits of shoreline. 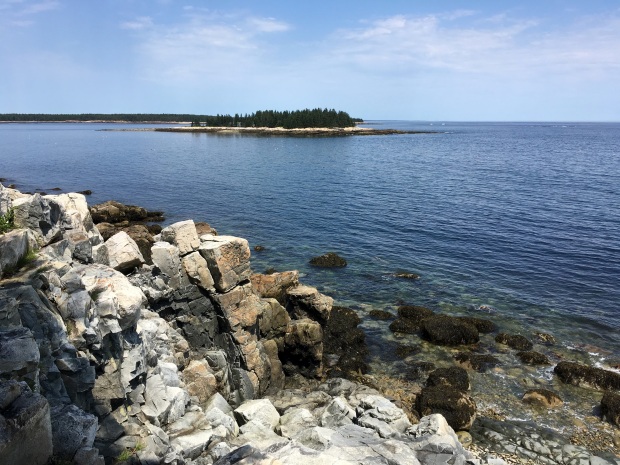 Exiting the park at mid-afternoon we decided to get lunch at the nearest place that served craft beer. We celebrated my birthday with a couple excellent pints, and I happily found some vegan fare to stave off my hunger as well. At this point we didn’t have anything else planned for the day so we started the drive north back to our campground… but it was still pretty early and so we decided to take an impromptu detour off Route 1 to McClellan Park after we passed a sign. The geology of this peninsula is very similar to that of the Schoodic, and was characterized by the pink granite and tall spruce we’d seen earlier in the day. We loved it, more so because there weren’t any expectations about the place. We roamed there for a bit, climbing around the rocky shoreline and laying on the warm granite; it was a perfect end to a perfect day. 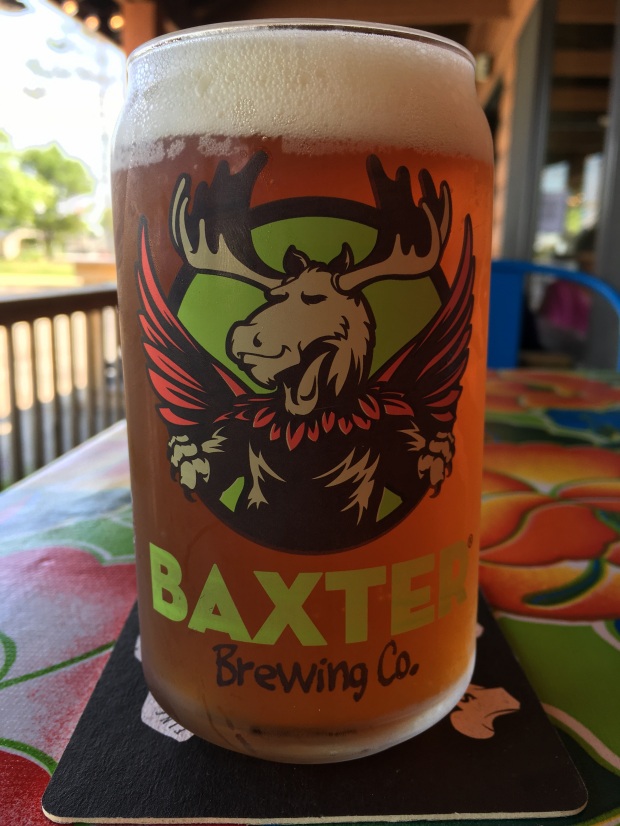 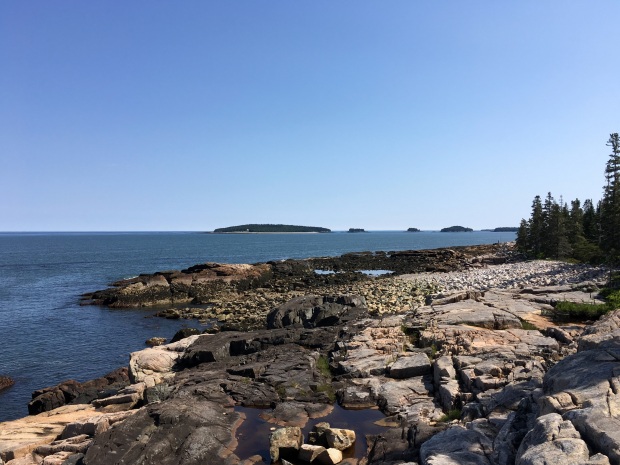 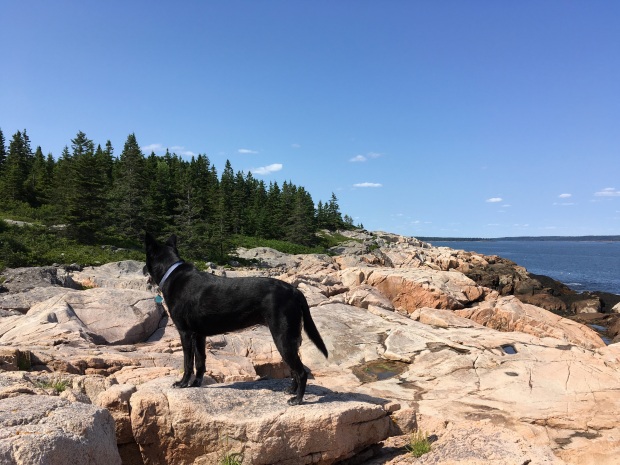 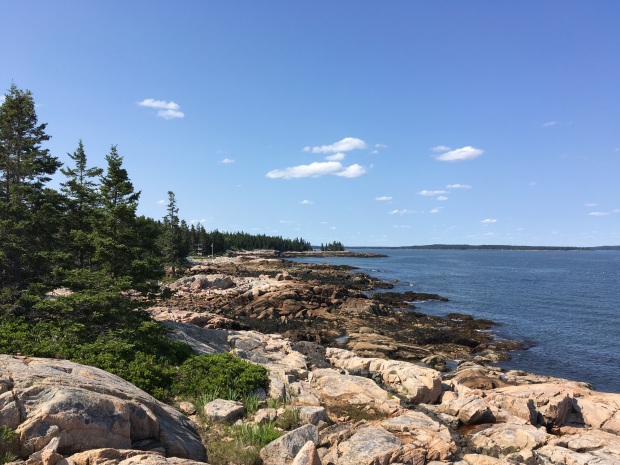 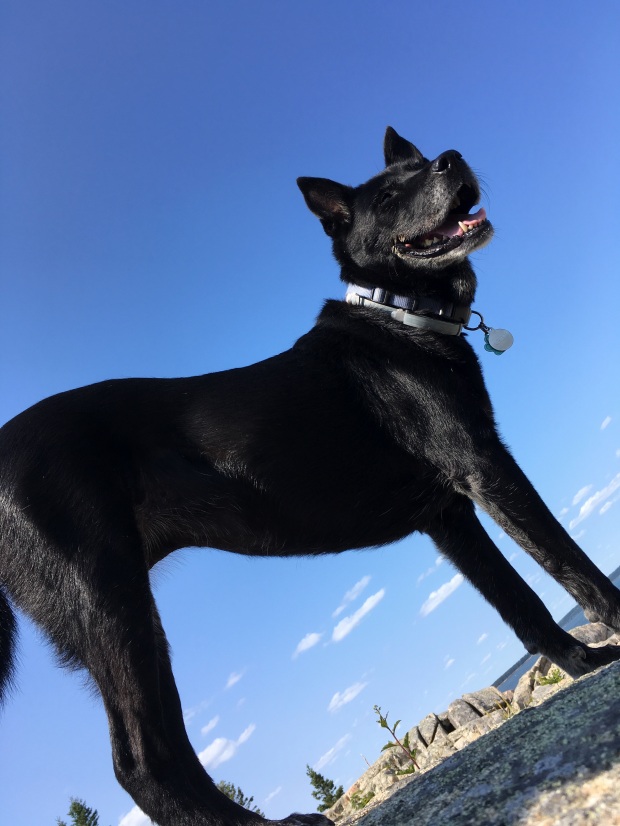 ← The Fishing Town of Lubec, an Exploration of Jasper Beach, and a Great Evening at Machias River Brewing Company
Hiking the Cutler Coastal Trail →