Before leaving Las Cruces for the summer we spent one more weekend up in the Sierra Blanca Mountains in search of some big trees, hiking, and cooler temperatures. Wanting to explore somewhere different than usual, we began our first afternoon checking out the walking trails near the Inn of the Mountain Gods. The trail closely parallels the road leading to the hotel, but with infrequent traffic and dense ponderosa pine forest surrounding the walkway, we often felt much further from civilization. The pleasant stroll was a perfect way to unwind after the flurry of wrapping up construction the past few weeks. At the end of the trail we took a side trip down to beautiful Mescalero Lake where we spent some time enjoying the blue water and the views of the 11,981-foot Sierra Blanca.

After staying overnight in the town of Ruidoso we set out early next morning to the Argentina Canyon trailhead to hike what (I think) is known as the Argentina Peak-Little Bonito Loop. Stringing together the Big Bonito, Little Bonito, Crest, and Argentina Canyon trails, the loop first ascends a well-graded 1,300 feet over 3 miles through forested drainages and over the rocky ridges in between. Near the top the trail leveled off and opened into sloping grassy meadows, just barely returning to life after the snow-filled winter, interspersed with strips of fir and tall ponderosas. Arguably some of the best views were in this mile long section as we continued our ascent to Argentina Peak – throughout we had interesting vantage points of some smaller peaks and lower ridges to the south.

Passing the rocky outcropping of the peak we had more fantastic vistas in which both the White Sands Basin to the west and the canyons gently falling to the west could be appreciated. With nearly 360-degree sightlines Abby enjoyed this section along the ridge very much, trotting down the trail with tail wagging and occasionally darting off the trail through the tall grasses. Just before we turned down Argentina Canyon we encountered the fenced-in Argentina Spring, lush, green, and seeping plenty of water. Descending, we followed Bonito Creek back to the trailhead under a dense canopy of trees not usually seen in the Sierra Blancas. Though our views almost entirely disappeared at this point the gurgling stream and the green conifers were a delightful and surprising change from the open meadows near the top. 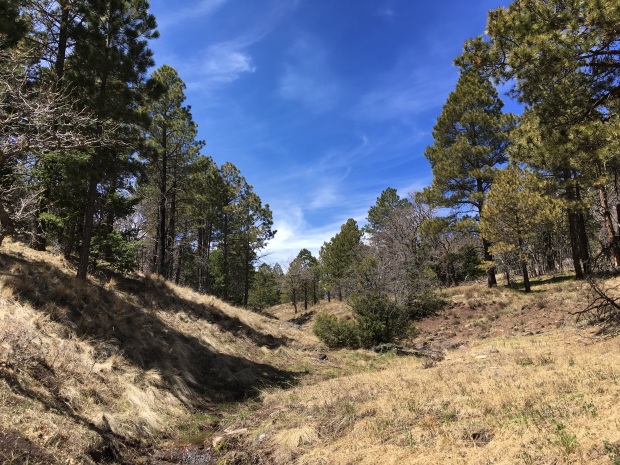 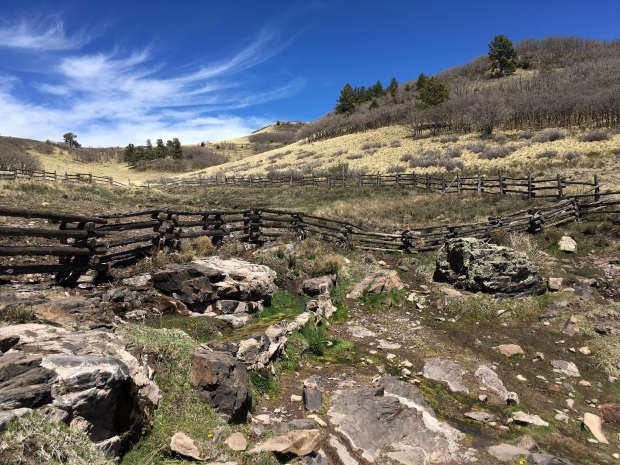 The following morning we packed up and left Ruidoso, driving south towards the town of old mining town of Cloudcroft where we picked up the Sunspot Highway. The 15-mile drive follows the rim of the Sacramento Mountains south through fir and aspen, and includes multiple overlooks where we followed the canyons trail off into the White Sands Basin. The road terminates at Apache Point Observatory, elevation 9,147 feet, where we spent a few moments at the Visitor Center before embarking on the walking tour of the grounds past many of the telescopes past and present used for observing the sun. The largest, the Richard B. Dunn Solar Telescope, towers 136 feet above ground and an incredible 193 feet below ground and is a single optical instrument. Though many of the telescopes are still being used for research today, most are being phased out and used for student research and general learning opportunities.

← The Usual: Photo Roundup of Hikes in the Mesilla Valley
Drywall to Final Punch List: The Second Half of the Build Season in Las Cruces →