Hancock Peak? But Maybe Just a Nice Place to Look at Aspen.

Hancock Peak, a volcanic cinder cone whose prominence rises 500 feet above the high meadows of the Markagunt Plateau, has been on my to-do hiking list for quite some time. In fact I tried the northern approach back in 2017 but lost the little-used trail soon after entering the aspen thicket and was unable to navigate a reasonable path to the base of the slope for the ascent. Both before and after my initial endeavor Tom relayed his horror story of tedious rock-hopping and potential ankle-turning on their attempt so I knew Tom would be a hard no on my second try – but Terry is most willing to hike anything and so despite his previous bad experience he agreed to come with me and attempt it from the south.

The southern trailhead seemed perfectly civilized, surrounded by rolling meadow and spruce which made me feel confident we wouldn’t encounter too much difficulty on our way to the peak. Early traverses up the easy grade through first-succession aspen bolstered my confidence but once we entered the established spruce forest I realized what exactly the description “boulder field” had referred to. Luckily neither of us were too phased by this stretch after years of hiking across lava fields (which is most decidedly a pain in the ass, unlike this trail through larger boulders that offer you plenty of surface to place a foot) and we adjusted pace accordingly while we moved into mature aspen stands and spruce. For sure deliberate foot placement and good balance was required at many points but we persevered without much inconvenience, enjoying the soaring trees and still forest.

A few miles in we came upon a small pond that we later surmised might be the interior of the cinder cone; the mostly stagnant water was a bit iffy-looking but nonetheless appealing to an overheated Abby. Without having been able to navigate by sight we were unsure of our distance from the peak and so kept going, traversing the nearly-flat small meadows populated by thick, healthy aspen and even descending a few hundred feet before we concluded that we’d either already reached the high point (likely near the pond) or the trail had bypassed the true peak altogether. We kept going anyway for a while just for the sheer pleasure of walking among the tall aspen and watching the clouds pass overhead, pushed by a still-distant storm. Eventually we turned around however, retracing our steps back up to the water and then down the rocky trail, whereupon we concluded that our reasoning was probably correct – we’d both reached the high point of the trail near the pond and the true peak actually lay a distance off the path, far enough that we couldn’t sight it through the trees. It was a truly enjoyable walk however despite our thwarted intentions, and one I would absolutely do again even if all we did was walk through the aspen. 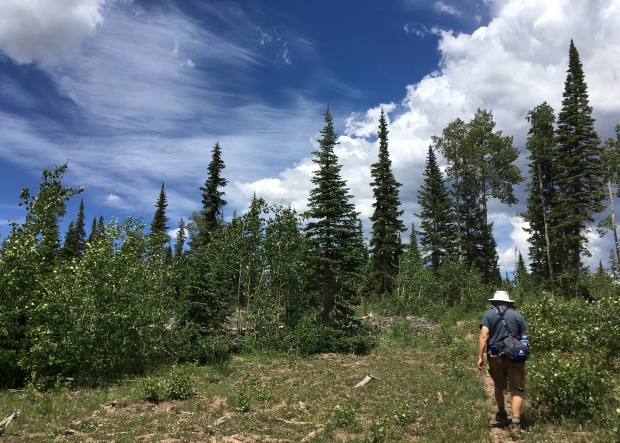 ← The Best of Utah High Country
Alternatives to Hiking: An Afternoon at Navajo Lake →