I first hiked the Skyline Trail in the Fishlake Mountains in September 2015 and after realizing that 16.6 miles at this elevation with drive time and photo stops was not a one day affair I planned a second run in summer of 2017. On the second trip I brought Tom and Terry – and a shuttle vehicle, cutting the total distance to be hiked in half. But we were turned around by a ferocious hail storm, leaving the trail still uncompleted. Vowing I’d get it the third time I came up with a grand plan to start earlier in the day AND hike it in a season with longer daylight… but this too fell through.

With only a couple days left before leaving Utah this hike remained on my list but for a combination of factors I had to accept that we wouldn’t get to hike the complete trail this year. Still, I was unwilling to pass it up entirely even if it meant I wouldn’t get to cover new ground because it’s so freaking beautiful, so on the second to last day before we left for a next build in Colorado, Terry and I made the drive up the Fishlakes.

Unlike our previous attempt together, we started from the Big Flat Trailhead in order for Terry to see the majestic views I had experienced on my first hike. Though it was way too early for the aspen to be blazing such as they were 4 years prior the vistas remained just as stunning – and we were treated to some beautiful wildflowers to boot. The monsoon clouds rolled in a bit earlier in the day than either of us expected but thankfully we escaped the rain as we gained a new appreciation for the shadows and light that contoured the high peaks of the Tushar Range.

The overlooks on this segment of the trail are spectacular but once again it was the feeling of walking along the top of the world, seemingly at eye-level with mountaintops ahead, that was most exhilarating. Crossing the fields of scree, clinging to steep mountainsides, traversing ridges, and alternating between verdant meadows and clusters of towering, snow-fed trees was intoxicating and had me longing for it to never end. We reached out turn around time all-too-soon, and though we started off knowing we wouldn’t be completing the full length of the trail, I felt a great longing to stay there, exposed to the tempestuous sky and wildness of the high country, but I’ll be returning – for a fourth round. 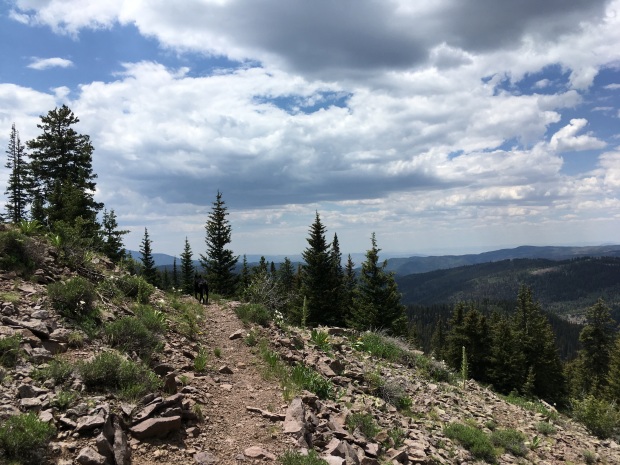